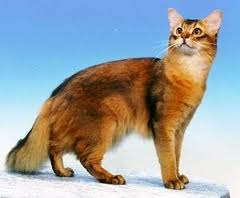 The Somali is a cat breed created from long–haired Abyssinian cats. The breed appeared in the 1950s from Abyssinian breeding programs when a number of Abyssinian kittens were born with bottle–brush tails and long fluffy coats. Abyssinians and Somalis share similar personalities — intelligent, playful, curious — however Somalis are more relaxed and easygoing than the more active Abyssinians. The body type and markings of the two breeds are similar, however the fur length of the Somali requires more grooming than the Abyssinian. Unlike most long–haired cats, Somalis shed very little excess hair.

Somalis have a striking, bushy tail, and two large ears which, combined with their ticked and often ruddy coat, has earned them the nickname of "fox cat" in some circles. In addition to the fluffy tail, the Somali breed features a somewhat darker stripe down its back, large ears, a full ruff and breeches, contributing further to the overall "foxy" look. Somali coats are ticked; each hair is ticked multiple times in two colors. Ticking is a variation on tabby markings, and occasionally a Somali may show full tabby stripes on portions of their bodies, but this is seen[by whom?] as a flaw, and tabby Somalis are only sold as neutered pets. The only tabby marking on a show Somali is the traditional tabby 'M' on the middle of the forehead. Like Abyssinians, they have a dark rim around their eyes that makes them look like they are wearing kohl eyeliner, and they have a small amount of white on their muzzles and chins/throats. White elsewhere on their bodies disqualifies them from show–status.