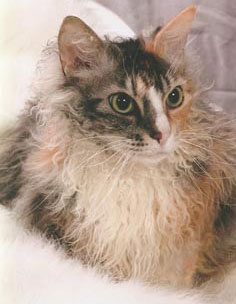 The first LaPerm was born in 1982 and was a spontaneous mutation in an otherwise normal litter of kittens. The breed founders, Linda and Richard Koehl owned a cherry farm in The Dalles, Oregon, and had obtained some farm cats for pest control. One of these was an ordinary brown tabby shorthair called Speedy who gave birth to a litter of kittens which included a rather bald female kitten with tabby markings on her skin. The Koehls were initially concerned about the kitten's appearance but she developed healthily and as she grew she developed a soft curly coat.

The kitten was given the name Curly and was given no special treatment, also working as a farm cat. In fact, she was nearly killed in an incident when she climbed into the warm engine of a pickup truck and was injured by the fan when the engine was started. She survived and became a house cat for a while recovering from her injuries and it was during this time that the Koehls came to fully appreciate her affectionate personality. She became pregnant and gave birth under a tree in the middle of a rainstorm one night. Linda Koehl heard strange noises and took a flashlight outside to find Curly fiercely defending her newborn kittens from barking dogs. Linda put the kittens into her pockets and took them into a warm barn to make them a safe nest in the hay. The next day when Linda was able to look at them in daylight she realized that all five kittens had the same appearance as their mother had at birth. All five were male and grew up to have the same soft curls. None of the five were neutered and their breeding activity led to many more curly coated kittens being born.

Linda found herself with a growing colony of unusual rex cats which included long and short coats. There was a range of colours and patterns including chocolate and colourpoints, due to the input of a local cat who had a Siamese mother. When people started commenting on her unusual cats and asking what they were, Linda did some research and realized that she had some kind of rex. She took some cats to a show to ask for feedback and was told by exhibitors, breeders and judges that she had something very special. Several key people in the USA cat fancies gave her their support and the breed has grown and to become a well established championship breed in the States with breeding programs in many other countries around the world.

The breed is genetically unique and not related to any other rex cat varieties, having a dominant gene causing their curly coats. They have an elegant and athletic build and are affectionate, active and outgoing in character. They are reputed to be hypoallergenic cats, provoking a significantly lower level of allergic responses than normal cats. Their most significant feature is their coat which is made up of soft waves, curls and ringlets, resembling a shaggy perm.