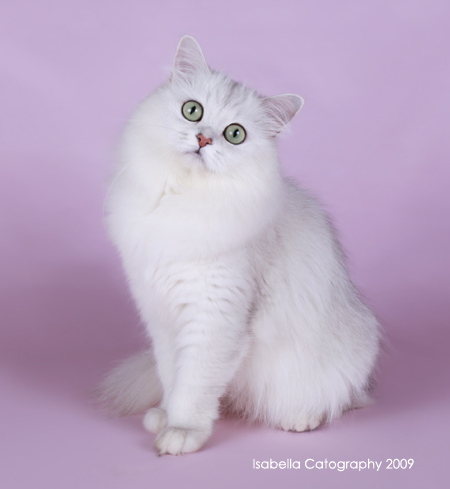 The Burmilla was originally created accidentally in the United Kingdom. Two cats, a Chinchilla Persian named Sanquist, and a lilac Burmese named Faberge, were both awaiting a partner of their own breed in different rooms. One night the cleaner left the door open. The two cats bred, producing four kittens born in 1981 that were so adorable that a new breed was born.

Burmillas are elegant looking cats with a distinctly ‘foreign’ appearance, reminiscent of Burmese and Chinchillas. . It is a medium–sized cat, with a gently rounded head, wider at eyebrow level and tapering to a short, blunt wedge. The ears are medium to large with slightly rounded tips. The coat is short with a silky texture and smooth lying with sufficient undercoat to give it a slight lift. There are five coat colours; black, brown, blue, chocolate and lilac. The coat may be either ‘tipped’ or ‘shaded’. Tipped means that only 1/8 of the hair tip is coloured, so the coat will actually look paler. A shaded coat is 1/4 coloured. Large, expressive, luminous green eyes are a key feature of the breed. In red, cream and tortie varieties, the eyes may be amber and are surrounded by dark rims, much like eyeliner. Coat length can vary from short to semi–long.

Unlike many cats, which may be either distant or demanding, the Burmilla is curious and affectionate, without being too cloying. Strangers may take some time to be accepted, but once introduced, a Burmilla will happily seek out the occasional stroke.