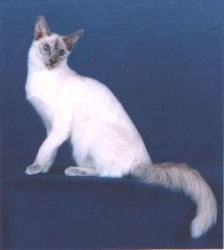 The "Balinese" is not actually from Bali or any part of Indonesia. It is not a naturally occurring breed, but originates from human–controlled breeding efforts.

The Balinese was originally registered as a "long–haired Siamese", and examples were known from the early 1920s. The occasional long–haired kittens in a Siamese litter were seen as an oddity, and sold as household pets rather than as show cats. This changed in the mid–1950s, when two breeders, Marion Dorsey of Rai–Mar Cattery in California and Helen Smith of MerryMews Cattery in New York, decided that they would commence a breeding program for these longhaired cats.

The name was chosen on subjective grounds: Smith named the cats "Balinese" as she felt they showed the grace and beauty of Balinese dancers, and because "long–haired Siamese" seemed a rather clunky name for such graceful felines. The breed became quite popular after this, and a number of breeders began working on "perfecting" the Balinese appearance. This led eventually to the development of two entirely separate "strands" of Balinese cat – some owners prefer a traditional or "apple–headed" Balinese, while breeders and judges tend to prefer a more contemporary "wedge–head" appearance. It is unknown whether or not Smith actually visited Indonesia.

The Javanese cat is not from Java nor Indonesia. Genetically they are long–haired Oriental.". The term "Javanese cat" was coined by a Helen Smith of MerryMews Cattery circa 1950. It is unknown if she had ever travelled to Indonesia.