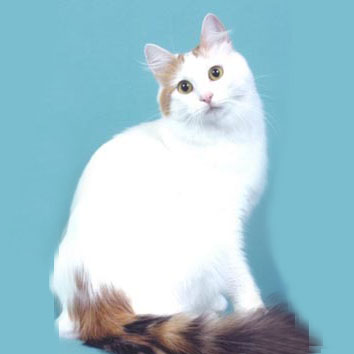 The Turkish Van is an ancient and natural breed believed to have originated in the eastern part of Turkey which is also known as Eastern Anatolia. In 1955 two British women, Laura Lushington and Sonia Halliday, were given some local cats on a trip to Turkey and decided to bring them home. They bred true, and were used as foundation cats for the breed.

"I was first given a pair of Van kittens in 1955 while travelling in Turkey, and decided to bring them back to England, although touring by car and mainly camping at the time – the fact that they survived in good condition showed up the great adaptability and intelligence of their breed in trying circumstances. Experience showed that they bred absolutely true. They were not known in Britain at that time and, because they make such intelligent and charming pets, I decided to try to establish the breed, and to have it recognized officially in Britain by the GCCF."

The first Vans were brought to the United States in 1982 and accepted into championship for showing in the Cat Fanciers' Association (CFA) in 1994. Since then, CFA has registered approximately 100 Vans born each year in the US, making them one of the rarest cat breeds. However, the gene pool thrives because it still uses cats imported from the Lake Van area of Turkey. Imported Vans have no human breeding intervention and are quite robust. No other breed is allowed to be mixed into the breeding schedule, and all registered Turkish Vans can trace their ancestry back to imported cats from the original area.

Called the Turkish cat when given breed recognition in 1969, the name was changed in 1979 in the US (1985 in the US) to Turkish Van to better distance the breed from the Turkish Angora cat which had its origins around Ankara, in central Turkey.

This is a lively, playful cat which interacts well with humans. Some can be trained to retrieve toys. They are not known as 'lap–cats', and can cope with being left alone at home if their owners work. Some Turkish Vans are attracted to water and will play in anything available – even toilet bowls – whereas others show a more typical catlike resistance to getting wet.