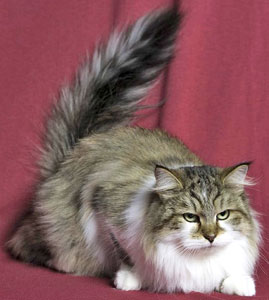 The history of the cat fancy in Russian has been controversial, there have always been cats in homes and strays in the streets, but they had only really been thought of as mouse catchers. Before 1917 there are isolated facts testifying cats being thought of as a breeding animal. There were some catteries but no breed clubs existed. In the memoirs of an old Muscovite there is an episode describing the merchants in Moscow having competitions for the cats and the fattest cat was the winner!

During the war in 1941–1945, the city suffered a 900 day siege, and the citizens died of hunger and cold, there is no wonder there were no cats left in the city, after the siege the rats invaded the city and to fight them thousands of cats were brought in from different regions in the USSR and brought to Leningrad by train. This fact is documented and as a result cats of all possible phenotypes mixed in the streets. Thus when the cats started to breed one could find very different phenotypes.

Earlier every large fluffy cat had been called “Siberian” not because they came from Siberia the North Eastern part of Russia but because their appearance was associated with the cold and severe climate there. In the cold humid and windy climate of St Petersburg, a large sturdy cat with a waterproof coat and dense undercoat had a better chance of surviving the climate, which is why so many of the cats of this phenotype was seen amongst the strays. One of these was the well known Roman who was used in the first description of the Siberian, and the basis of the first standard written by the President of the Kotofey club Olga Mironva and assisted by Irina Katzer.

The years between 1917 and the late 1980 there was a large gap. In the late 1980′s the first imported breeds appeared, these were mainly Persians and the interest in cats started to grow. The very first cat shows were held in Riga, Moscow and St Petersburg, these shows drew huge public interest.  When breeders first had access to the large European shows after the lifting of the Iron Curtain they saw many other semi–long hairs and decided the new breed had to be developed and become more distinct. Between 1988 and 1990 the new breed attracted attention in other countries. Judges visiting shows in St Petersburg developed an interest in the Siberian and quite a lot of first and second generation Siberians were exported. This was the beginning of the acceptance of this breed.

The Siberian was imported into America by Mrs Elizabeth Terrell of Baton Rouge, Louisiana “Starpoint Cattery”, and David Boehm of Hackensack, New Jersey, in 1990. Mrs Terrell was a Himalayan breeder and sent some to Russia to establish the breed into Russia in exchange for some Siberians.  Mr Boehm was visiting Moscow and arranged to bring home some Siberian kittens; these were the first imports and the beginning of the breeds arrival into the United States of America.

The Siberian cat has personality plus. Siberians have a very dog like temperament and are very affectionate. They come out to greet the visitors in the house and are not shy. They are very intelligent and very quick learners. They also have a triple purr and unlike other breeds have a chirping sound they use when they come to greet you. They are interested in water and may drop toys in water left in sinks to play. The Siberian makes the ideal lap cat and will live quite happily indoors with you.