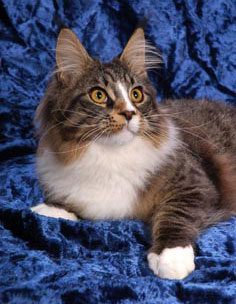 The Maine Coon is one of the oldest breeds in North America, and one of the newer cat breeds on show in Australia. Its ancestry is obscure, but it is thought to have originated in the state of Maine. In fact, in October 1985 it was declared the official Maine State Cat.

Local legend has it that the breed developed from matings between domestic cats and raccoons, hence the 'Coon' part of the name. However such matings are biologically impossible. Some people believe that these cats are descendants of six cats sent to Wiscasset, Maine, by Marie Antoinette during the French Revolution. Most breeders today think that the Maine Coon is the result of crossings between domestic shorthairs and longhairs (perhaps Angoras) introduced to America in the late 1700s by New England seamen or Vikings. The breed was popular in cat shows in the late 19th century, but its existence became threatened when long–haired breeds from overseas were introduced in the early 20th century.

The Maine Coon has since made a comeback and is now one of the most popular cat breeds in the world. The Maine Coon is noted for its large bone structure, rectangular body shape, and long, flowing coat. The breed can be seen in a variety of colors and is known for its intelligence and gentle personality.

Maine Coons are one of the largest breeds of domestic cat. Males weigh from 6.8 to 11 kg with females weighing from 4.5 to 6.8 kg. The height of adults can vary between 25 and 41 cm and they can reach a length of up to 100 cm, including the tail, which can reach a length of 36 cm and is long, tapering, and heavily furred, almost resembling a raccoon's tail. The body is solid and muscular, which is necessary for supporting their own weight and the chest is broad. Maine Coons possess a rectangular body shape and are slow to physically mature; their full potential size is normally not reached until they are three to five years old, while other cats take about only one year. In 2010, the Guinness World Records accepted a male purebred Maine Coon named "Stewie" as the "Longest Cat" measuring 123 cm from the tip of his nose to the tip of his tail.

Maine Coons have several physical adaptations for survival in harsh winter climates. Their dense water–resistant fur is longer and shaggier on their underside and rear for extra protection when they are walking or sitting on top of wet surfaces of snow or ice. Their long and bushy raccoon–like tail is resistant to sinking in snow, and can be curled around their face and shoulders for warmth and protection from wind and blowing snow and it can even be curled around their backside like an insulated seat cushion when sitting down on a snow or ice surface. Large paws Maine Coons, facilitate walking on snow and are often compared to snowshoes. Long tufts of fur growing between their toes help keep the toes warm and further aid walking on snow by giving the paws additional structure without significant extra weight. Heavily furred ears with extra long tufts of fur growing from inside help keep their ears warm.

Maine Coons are known as the "gentle giants" and possess above–average intelligence, making them relatively easy to train. They are known for being loyal to their family and cautious—but not mean—around strangers, but are independent and not clingy. The Maine Coon is generally not known for being a "lap cat" but their gentle disposition makes the breed relaxed around dogs, other cats, and children. They are playful throughout their lives, with males tending to be more clownish and females generally possessing more dignity, yet both are equally affectionate. Many Maine Coons have a fascination with water and some theorize that this personality trait comes from their ancestors, who were aboard ships for much of their lives. Maine Coons are also well known for yowling, chattering, chirping, "talking" (especially "talking back" to their owners), and making other loud vocalizations.