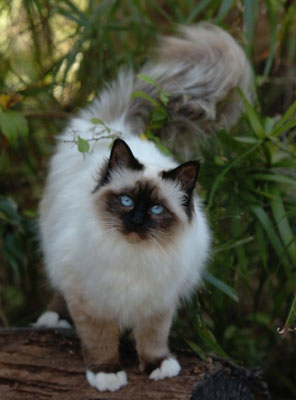 The Birman cat is believed to have originated in Burma, where it was considered sacred, the companion cat of the Kittah priests. The arrival of the Birman in Europe began in 1919 with two Englishmen, Major Gordon Russell and August Pavie, who were living in France at the time. They received a pair of Birmans from the Kittah people in gratitude for their part in saving the temple from being over run by invading enemies. The male unfortunately died during the journey to his new home, but the female survived the long ocean voyage. She was in kitten on her arrival, this litter produced the first Birmans to be seen in the western world.

In 1925 the Federation of Feline Francaise recognised the Birman as a true breed of pedigree cat. During the war all pedigree cats in Europe suffered a great set back. Of the Birmans that had been born only two now survived, a pair named Orloff and Xenia Kaabaa. The offspring of these pair formed the new foundation of the Birman breed in post war France. other long haired breeds were used to guarantee the continued existence of the Birman, but by the early 1950´s pure Birman litters were being produced from Birman parents.

The controlling body in France began to recognise the potential of this breed on the show bench and by 1955 the Birman was once a gain recognised as a pure bred aristocrat in Europe. From that time on only pure Birmans were bred. It has taken over thirty years of breeding by devotees of this breed to bring the Birman up to the high standard that exists today.

Birmans are wonderful characters and because they are a very loving, gentle cat, they will fit into virtually any home. They are very devoted to their owners and will either walk with you or even between your feet. They are not vocal cats but still manage to make their feelings known. They thrive on your companionship and appreciate the company of another cat, especially if they are to have long periods on their own while you are out at work for the day.